College Football Today & ESPN Plus Top 2022 APB recruit Caleb Texada's Scout Trout Elite football recruiting profile can be found below, who is the best APB recruit in the talent rich State of Texas. 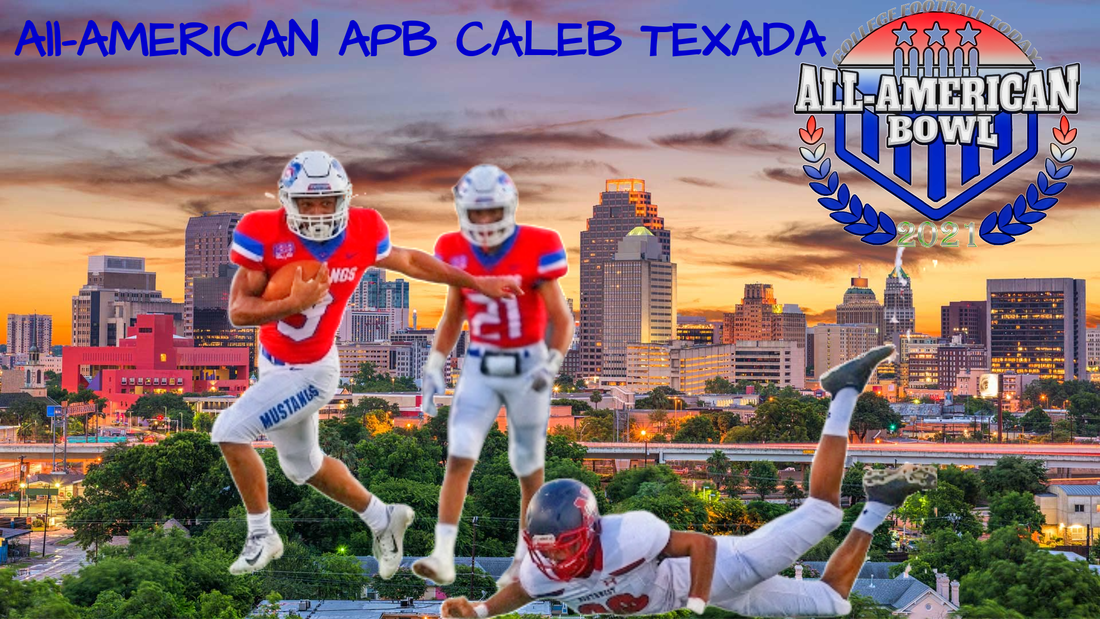 College Football Today & ESPN Plus Top 2022 Running Back recruit Caleb Texada is featured on the 2022 Top 800+ Top Football Recruit rankings & was selected for the College Football Today & ESPN Plus All-American Bowl in San Antonio, Texas. Texada is the most dynamic and explosive running back in the State of Texas and will be one of the most sought after recruits in the nation come the April NCAA Football Evaluation period.

Read the best 2022 Running Back in Texas Caleb Texada's Scout Trout Elite Sophomore season scouting report below and see why we believe Caleb is the best running back in the State of Texas in the 2022 recruiting class.

Top 2022 football recruits at College Football Today features one of the fastest and most explosive players I have evaluated on tape, who hails from Grapevine High School in Texas and ranks #5 overall in the nation for RB recruits. Caleb Texada was able to carry the football 148 times for 861 yards and 8 touchdowns, while also being able to haul in 28 receptions for 396 yards and 3 touchdowns. When you watch Texada's tape below, you will see a young man who was clocked at 4.44, 40 speed and it is quite obvious he is one of the fastest players 2022 recruits in the nation at College Football Today. Caleb shows an innate ability to follow his blockers per play design and possesses extreme burst upon finding the running lane. Once Texada breaks into the open field, good luck catching him, as you will see what makes him capable of busting a big play at any given moment in his Scout Trout Elite football recruiting profile above.

Top 2022 APB recruits are in the Top 2022 RB recruit rankings at College Football Today, as many could be elite running backs at the next level and/or line up as slot receivers/wing backs. I have not found many that possess as many dynamic attributes as Caleb Texada and he also carries a 4.2 GPA, which is why he is starting to receive major FBS interest from the likes of ECU, TCU and across the ACC. Texada has impeccable field vision when evaluating his tape above sets up his blockers perceptively before exploding downfield. He can start and stop on a dime when running into traffic, while changing directions at a rapid pace and shows the ability to run through would be tacklers.  You can witness Caleb being used as an outside receiver in the screen game at around :56 seconds into his highlight's and you start to see how valuable of an offensive weapon he will be over the course of his historic career.

When 2022 top APB recruit Caleb Texada catches the football on the wide receiver screen pass, he is able to scamper through defenders for a 55 yard score and makes it look quite easy in the process. On the very next play, Texada is used coming out of the backfield on a beautifully designed running back screen and exhibits uncanny agility in making the first defender miss, while using his cheetah like quickness to find pay dirt once again. I really value the way Caleb is able to find the cutback lanes time and time again and his route running is some of the best I have witnessed from a top 2022 APB recruit. The wheel route coming out of the backfield on the following play shows Texada completely toasting the outside linebacker and weaving his way to yet another brilliant touchdown for Grapevine. I believe what truly makes Texada an elite back at College Football Today is his impeccable balance, as he is continually able to break arm tacklers throughout his stellar young career in Texas HS football.

he NFL combine 40 yard dash is used to measure who the fastest players are in the 2020 NFL Draft and Caleb Texada could be on track to be one of the top performers in the nation in the event in the future. Once you get to the NFL Combine, everyone is normally fast, but paying attention detail in their combine technique is what is able to shave those critical tenths or hundreds of a second off of their 40 times. We started tracking day one 40 times at the 2020 NFL Combine at College Football Today and Caleb would have ranked in the top 10 with QB's, WR's and TE's in the 40 yard dash with his fastest time of 4.44. Click the button below to view this year's day 1 2020 NFL Combine 40 times, as Henry Ruggs was able to run a blazing 4.27, 40 yard dash.